I spent most of March exploring this space facing a terrifying blank canvas. Tropic, the remote coworker timezone tool I had built was interesting and fun, but it was ultimately solving a small logistical problem in the big, challenging space of "adding context and comfort to your life as a remote worker".

I was happy with the problem space, but wanted to aim bigger.

Today I am launching Talkshow Version 1.

Solving my own problem

This is a space that's close to my heart.

I spent the last 3 years working in a global team with members all over the world with some in Europe, some in Asia, some in North America. This is supposed to be the future of work, but at times it was very challenging.

Time zones made communication difficult. Real time video calls were often glitchy or just impossible to schedule in the first place due to calendar conflicts. Text chat was an always-on distraction and felt very cold and impersonal (plus we were hardly ever online at the same time anyway).

I never managed to put a face to the name of about 50% of people I saw in email threads.

This is not the way to build resilient remote teams, that have each other's backs and do amazing work together.

"Real-time" in a world where people work in different time zones and have flexible working hours, is almost a redundant concept. Asynchronous communication is much better.

"Text chat" in a world where people don't see each other, erodes our ability to empathise and understand. Video is an great way to solve this.

So what would an "asynchronous team video communication tool" look like? I pivoted Tropic and launched a Talkshow MVP on Product Hunt at the start of April.

The product that I launched in April was a sort of discussion board with video clip attachments. The concept was well-received, with many people saying they grokked the idea and could see how it would be useful. It seemed other people also shared my pain when it came to working in remote teams. 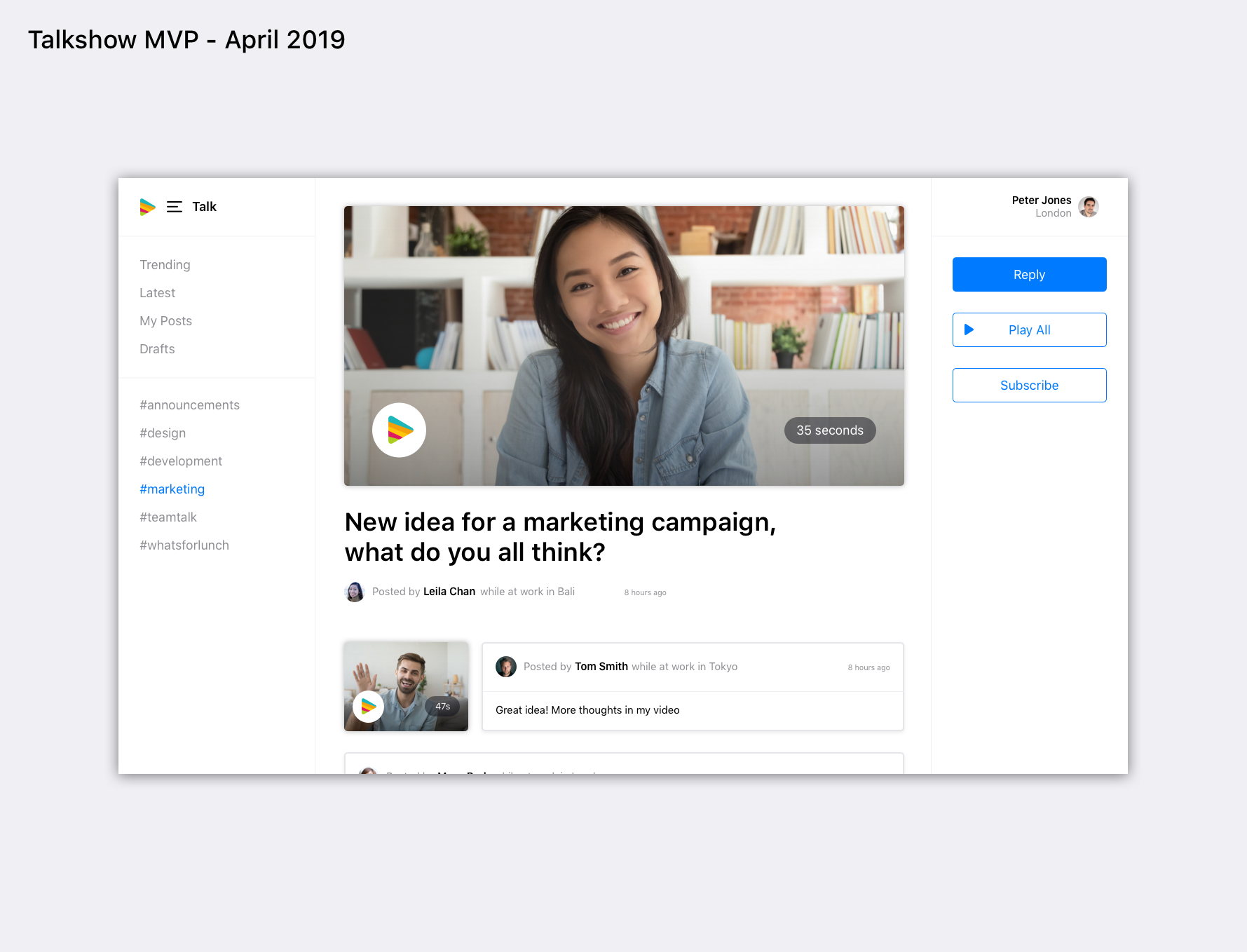 The problem with this MVP was that the barrier to entry was too high. Too many steps for users to get started, and the concept of a discussion board with video attachments was something new. I needed to refine the proposition to something simpler and more relatable.

That's what I've spent the last month doing and today I am super happy to announce the official launch of Talkshow and its first core product, Stories.

Stories is a super simple way to gather video updates or opinions from your team. You can send out a link to your team, everyone records their updates, and the result is this: 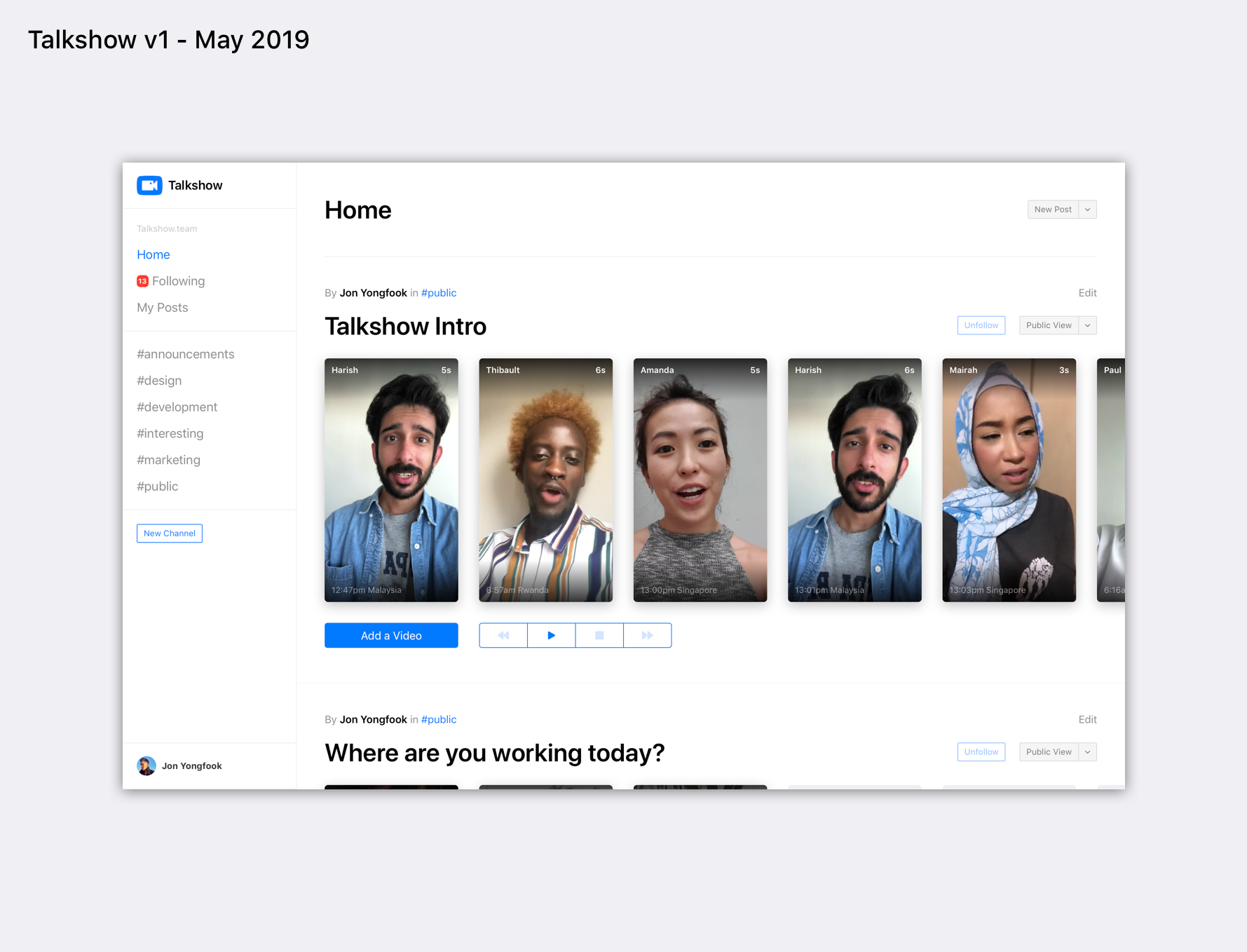 Short team videos that play in a chronological sequence. It's a concept that's been made popular by Snapchat, FB, Instagram etc but hasn't yet seen much use in business tools. I actually think this method of video delivery is ideal for a number of team scenarios.

Stories is such a simple product that I intend customers to use it for various different purposes. Some of those might be:

Because this product is my focus going forwards, I've also taken a bit more care over the branding than usual. I've had great fun creating visuals that try to communicate team diversity and seeing the real person behind those text chats / emails.

The response so far has been excellent. This is a problem space I've experienced and want to make better. There's an opportunity to solve some unique problems. The potential market size is large.

I have an extremely aggressive product roadmap for this year. One of the other remote team scenarios I really want to make better is presenting your work / powerpoints.