UPDATE 10/09/2019: As per this thread of tweets, I'll be shutting Talkshow down on September 13th. Thank you for supporting and trying out Talkshow!

Time for some real talk.

4 months have passed since I decided to end my 12 startup challenge and focus on Talkshow, the 7th product that I launched during the challenge.

It received an enthusiastic welcome from the Producthunt community, got a load of early traction and was in a space that I'm personally / emotionally invested in solving for.

A slam-dunk recipe for success right?

In the last 4 months I have been working on Talkshow, I have watched the usage and customer acquisition metrics slowly dwindle to zero.

Like most founders who live on a diet of endless startup success stories, I thought that 4 months in I would have steady MRR, and be on my way to growing a sustainable business.

Unfortunately the opposite is true.

In 4 months, Talkshow has achieved:

The free to paid conversion rate is very low, but here's the part that's especially hard to swallow…

All paying teams churned after their first month. 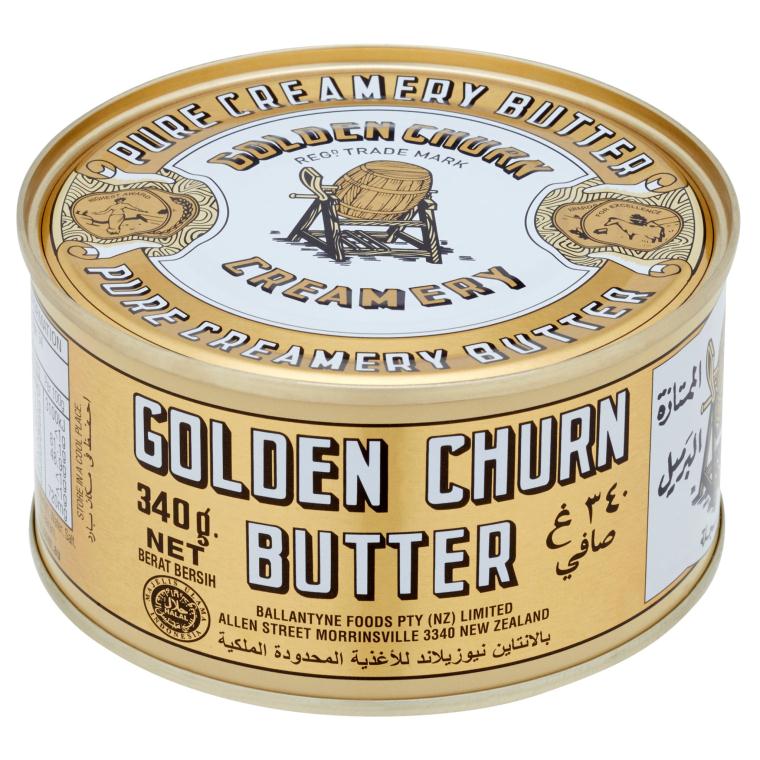 Users saw some initial value but it didn't prove to be sticky enough.

New user acquisition has stalled now, as this chart shows:

After such a promising start, what is going wrong?

Lets get back to basics.

What problem am I trying to solve?

Nearly every potential remote team customer I talked to had the same single complaint about remote work - the feeling of disconnection, isolation and loneliness.

I too have felt this and I think it's going to be a growing problem.

Naively, I thought "wow… if I could solve this, it would be huge!"…

It turns out this is a difficult problem to solve. Here are some of the issues that customers have given me feedback on.

Network effect - For a tool like Talkshow to be useful, everyone from the team needs to be on it. Talkshow is fun when the whole team is contributing videos, but when it's just one or two early adopters, it has limited utility. The problem here is, getting a whole team onboarded onto a new tool is quite difficult to do. Think about how hard it is to get one user through your onboarding funnel… for products requiring network effect you now need to do that 10 times for a single client to experience the value proposition.

Shyness / awkwardness - Although real time video can sometimes be clunky with glitchy connections etc, the act of interacting in real-time with a friend or coworker is entirely natural. Asynchronous video however, takes a bit more adjusting to. It can feel strange recording a video clip unless you're already a famous Youtuber or Instagrammer! Add to that the fact that many remote workers are working from coworking spaces where it might be strange to just start talking to the screen while you record a video… and you end up with a tool that people may understand the value of, but don't actually want to use it.

An emotional problem - Isolation and loneliness are emotional issues with potentially a number of different solutions. Is it too hard to solve an "emotional" problem with technology? It has been done before - Facebook, Tinder, Calm are essentially tech solutions to human emotional needs… but as an indie hacker perhaps I am in over my head and tackling too broad a problem. I'm starting to think that indie dev skills are best used on solving technical or logistical problems where you can clearly define the acceptance criteria.

Feature duplication - I felt that I was starting to create features that had a lot of overlap with other apps. Almost every new app has a "comments" feature for example. But in a team context where the whole team is on Slack, is a comments feature external to Slack really needed? Or helpful?

Pivoting Talkshow to a Slack app

I'm experienced enough to know that growth takes time, but I also know when a startup is on life support. The product needs a rethink and I need to address the problems outlined above. 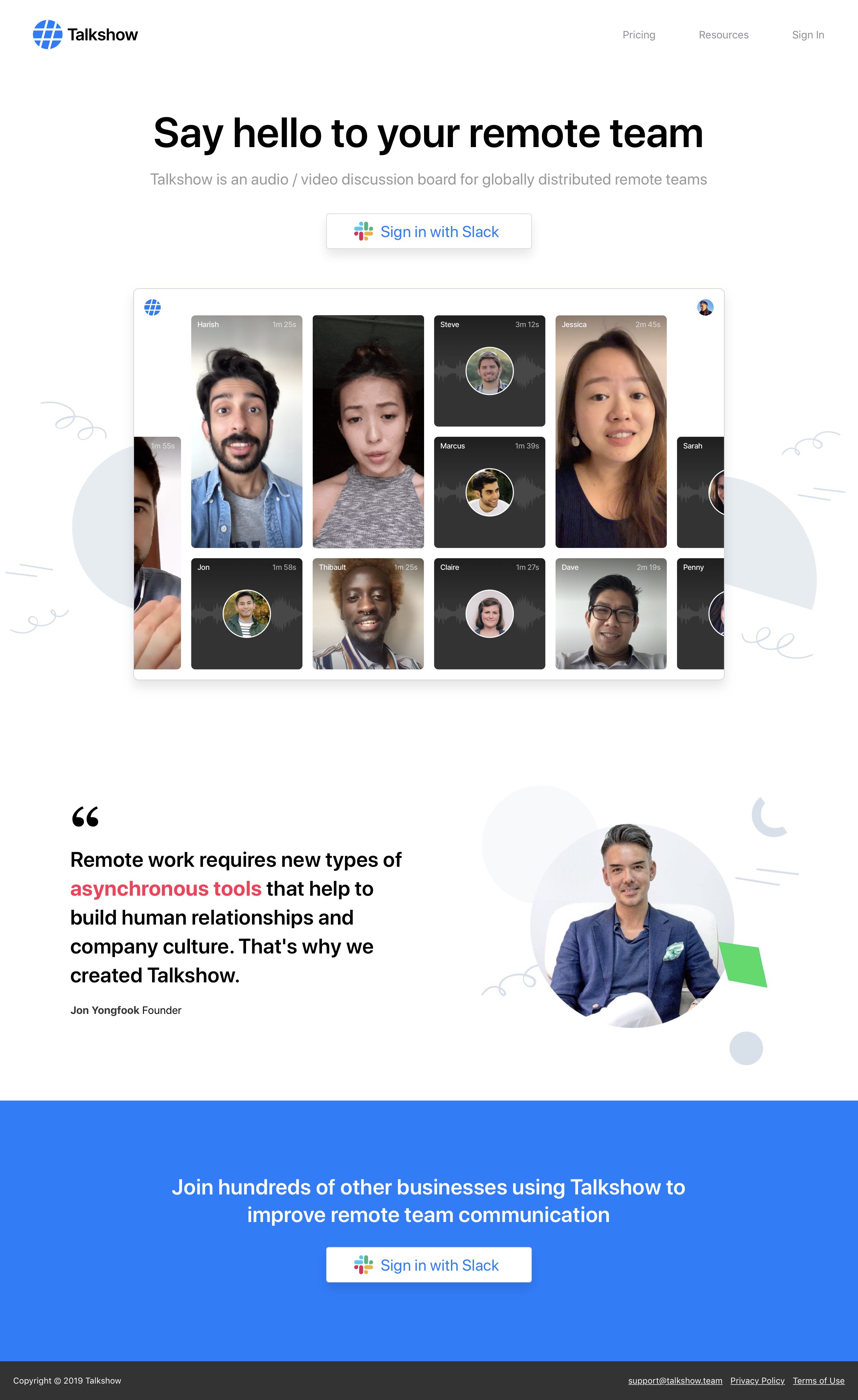 Addressing network effect - Talkshow is now 100% a Slack app. The only way to sign up is via a one-click Sign in with Slack process. This means it is much easier for whole teams to onboard themselves - no more clicking links in invites and confirmation emails. You just sign in with Slack and you'll join the same team on Talkshow. However, this also means that non-Slack users can no longer sign up. This is a trade-off I was willing to accept, especially since Slack teams are an excellent target segment - the ideal Talkshow customer is a remote team using Slack for chat, who are looking for additional tools to enhance the video / audio side of their team communication.

Addressing shyness - This is a difficult one to solve. In the B2C world, apps trick users into being more extroverted mostly through the use of filters and flair to either mask or manipulate your raw image. I think that would be an interesting area to experiment with in the B2B world, but I'm not quite ready to invest dev time in that yet. For now I've addressed the user feedback with a simpler solution - Talkshow now allows you to record audio clips instead of videoing yourself :)

Addressing features - Part of the new pivot has been to make some tough product decisions and remove these sorts of duplicate features. So there's no more commenting on video / audio clips in Talkshow, since that can be accomplished more efficiently as a Slack thread within Slack itself.

That said, there are some new features specific to Slack such as the ability to start Talkshow topics with a slash command and nicely-presented updates when your team responds :) 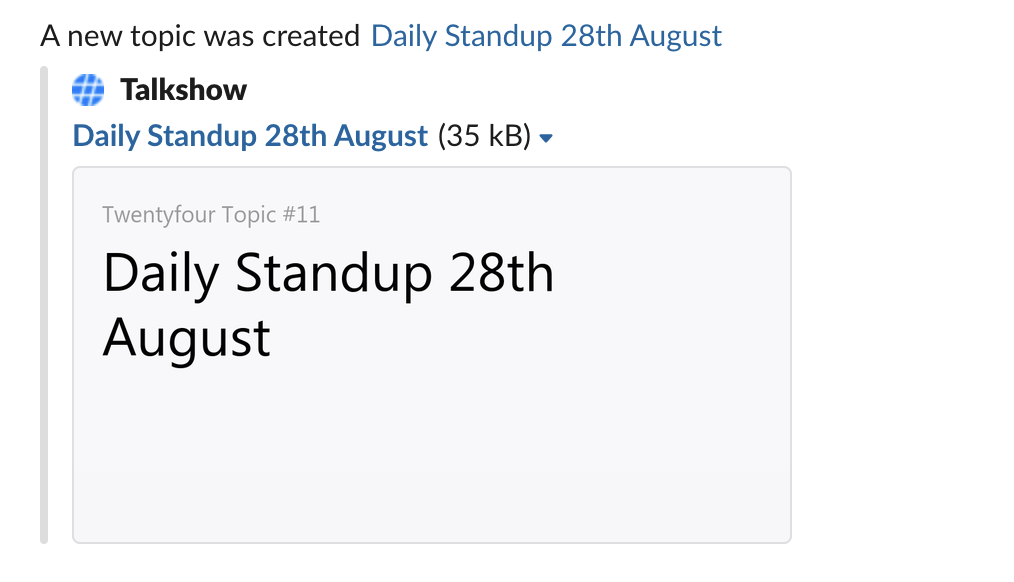 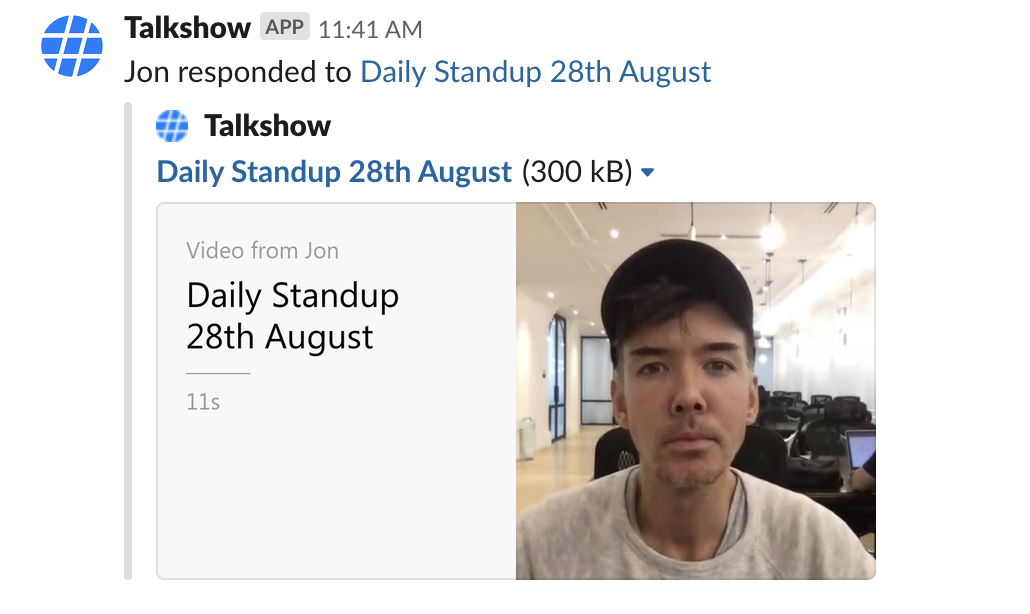 After this pivot I'm going to give Talkshow one more month of life, after which I will re-evaluate the metrics.

As an indie dev I don't want to spend half a year grinding on something with no growth. I build to solve problems, and if there's no growth it means I'm not solving anything.

I'm not too proud to say maybe I got my hypothesis wrong, or maybe the product is too early, or maybe it's too challenging a space for an indie dev and I need to pick a more binary problem space where the problem is either solved or it isn't, and the value for the customer is much clearer.

As a result I may controversially end up restarting the 12 month challenge where I left off… Can somebody ask Pieter Levels if that's allowed? 😅